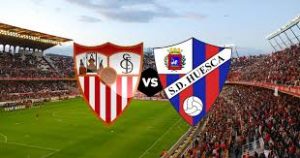 Sevilla hosts Huesca in a last game from the 10th round of the Spanish La Liga. Let’s take a look at this clash at the Estadio Ramon Sanchez Pizjuan.

Sevilla are aware that win over Huesca would allow them to come closer to the top right again. Right now Los Rojiblancos are 5th in the league standings with 16 points, but just 3 points behind the leader Atletico Madrid. Sevilla have 5 wins, 1 draw and 3 defeats since the beginning of the campaign. They had a rocky start of the season, but now they are once again looking sharp and ready to fight for their place in the Top 4.

Sevilla were enjoying a great run in the league, but this run ended with a 2-4 loss against Barcelona at the Camp Nou. Pablo Machin’s team fought bravely against the Catalans, but Barcelona were just better on this day.

During the week Sevilla had a match in Europa League, enjoying a thrilling 6-0 win over the Turkish club Akhisarspor. It was a very entertaining night for the Spanish team, which made a great present to its fans.

Huesca are 20th in La Liga with just 5 points won so far. They have 1 win, 2 draws and 6 defeats since the start of the season. In their last five games, Huesca suffered four defeats and made one draw – against Girona.

In their last match Huesca suffered a 0-2 loss at home against Espanyol. Francisco’s team is having serious problems at the moment and they might lose their place in the league if they don’t fix them very soon.

Of course, Sevilla are a favourite against Huesca, especially at the Ramon Sanchez Pizjuan. Los Rojiblancos will want to return on the winning road and this is a great chance for them to do it.