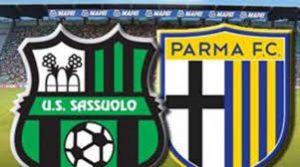 Sassuolo hosts Parma in a match from the 32th round of the Italian Serie A. This game is going to be played on Sunday afternoon. Let’s take a look at it.

Sassuolo are having a decent season so far. The club is 11th in the Serie A standings, comfortably taking a place in the middle of the standings. Right now Sassuolo have a record of 8 wins, 12 draws and 11 defeats in the league. In their last five games in the Calcio they have won twice, made two draws and suffered two defeats.

In their last game in the Serie A Sassuolo shared the points with Lazio for a prestigious 2-2 draw against Lazio at the Stadio Olimpico. Rogerio and Domenico Berardi scored for the visitors in the capital. Sassuolo were seconds away from winning this one, but Senad Lulic equalised for the hosts in the 95th minute of the game. It was really a fine performance by Sassuolo.

In the same time Parma are 13th in the standings with 34 points and a record of 9 wins, 7 draws and 15 losses. Being 6 points away from the relegation zone, Parma are in a good position to secure their survival, but winning some few points more won’t hurt.

In their last match Roberto D’Aversa’s boys shared the points with Torino for a 0-0 draw at the Stadio Ennio Tardini. It was a good strategical result for Parma, because every point won is important in the fight for survival. Of course, Parma would have liked more to win the game, but still – a point is a point.

Just two points are separating Sassuolo and Parma in the standings, so it’s hard to say which one of these two teams is the favourite here. But Sassuolo have the home ground advantage and it might be an important factor to consider.