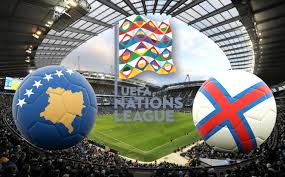 Kosovo hosts Faroe Islands in a match from Group 3 of League D of the UEFA Nations League. Let’s take a look at this game at the Fadil Vokrri Stadium in the capital city of Pristina.

Surprising for a lot of people, but Kosovo avoided a loss in their first game in the Nations League. Led by the Swiss manager Bernard Challandes, the Kosovari fought for a 0-0 draw duing the visit to Azerbaijan in Baku. Being a very young and small country, for Kosovo every point on international level in official matches is a great success.

We can say that Kosovo’s form was impressive even before this. They have won all of their last four friendly matches, beating Latvia, Madagascar, Burkina Faso and Albania. It’s obvious that the manager Bernard Challandes is doing a very good job since his arrival. If he continues like this, maybe Kosovo will drastically improve its levels in the next year or two.

The Faroe Islands on the other hand are currently leading Group 3 after their 3-1 win over Malta in the previous round. The game in Torshavn was dominated by the home team, led by the Danish coach Lars Olsen. Joan Edmundsson, Rene Joensen and Hallur Hansson scored the winning goals for the Faroe Islands, while Michael Mifsud scored Malta’s only goal in the match.

Before beating Malta at home, the Faroe Islands didn’t lose neither one of their two friendly games in March. They made a 1-1 draw against Latvia and celebrated a 3-0 win over Liechtenstein.

We can say that this is a match between two sides who are currently on pretty much a similar level. That’s why it’s very hard to pick a favourite here. Kosovo have the home ground advantage, but the Faroe Islands have bigger experience on international level.