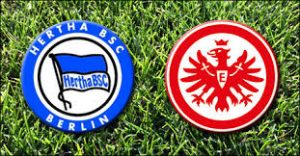 Hertha BSC hosts Eintracht Frankfurt in a game from the 14th round of the German Bundesliga. Stay with us, because we are about to present you with our thoughts about this match in the capital city of Berlin.

Hertha are currently 7th in the Bundesliga standings with 20 points and a record of 5 wins, 5 draws and 3 losses. In their last five games the Old Lady celebrated only one win – against Hannover 96 in the previous round. Before this they made two draws and suffered two defeats.

It was a positive performance for Hertha against Eintracht. Jordan Torunarigha opened the score for the Old Lady, while Vedad Ibisevic doubled the lead with a goal in the 73th minute. It was a long time without a win for Hertha, so this win was a great relief for them.

Right now Hertha are just one point behind the 6th Hoffenheim and the Europa League zone, so they are still in the fight for European qualification for the next season.

Eintracht Frankfurt are having a good season so far. The DFB Pokal winners are 5th in the Bundesliga standings with 23 points and a record of 7 wins, 2 draws and 4 losses. In their last five games Eintracht enjoyed three wins, made one draw and suffered one defeat.

This defeat came in the previous round, when Eintracht were beaten by Wolfsburg with 1-2 at home. Luka Jovic’ goal in the 87th minute was not enough for Eintracht to get something more from the game.

These are our thoughts about the Bundesliga clash between Hertha BSC and Eintracht Frankfurt in the capital city. These two teams are very close to each other in the standings, so we expect a close fight between them. Of course, Hertha have a slight advantage because the opportunity to play at home.