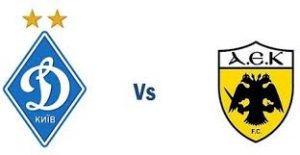 Dynamo Kiev hosts AEK Athens in a second leg from the 1/16-finals of the UEFA Europa League. The first game in Athens ended with a 1-1 draw, which gives the Ukrainians a certain advantage before the rematch.

The first leg in the Greek capital didn’t go very well for AEK. Viktor Tsygankov gave Dynamo an advantage after just 19 minutes of play. Dynamo were close to winning the match, before AEK to score the equalizing goal thanks to the reserve Astrit Ajdarevic.

This goal kept some of AEK’s chances of progressing to the next round, but clearly they are not in the position of favourites. Now Dynamo are in a better position to qualify for the 1/8-finals, especially at home ground.

In the Ukrainian Premier League Dynamo are currently second in the standings, trailing on three points behind the leader Shakthar Donetsk. They have 42 points and a record of 12 wins, 6 draws and just one loss. In their last five games they are unbeaten, winning four of them and making one draw. In their last match Dynamo enjoyed a 1-0 win over Olimpik Donetsk. The only goal in the game was scored again by Viktor Tsygankov.

Meanwhile in the Greek Super League AEK Athens are currently 2nd, trailing on just two points behind the leader PAOK. In other words, AEK have a realistic chance of winning the Greek championship this season. All they have to do is be as consistent as they can and maybe the title will be their.

In their last match AEK enjoyed a terrific 4-0 win over Xanthi at home. Ognjen Vranjes scored a hattrick for the winning team, while one more goal was added by Anastasios Bakasetas. This once again proved that AEK are a strong contender for the gold medals this season.