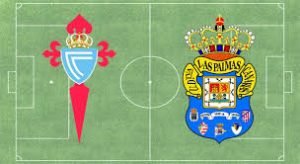 Celta de Vigo hosts Las Palmas in a match from the 27th round of the Spanish La Liga.

In the previous round Celta suffered a 0-1 defeat during the visit to Girona. The team didn’t perform too well in this game.

Now Las Palmas are coming to the Estadio Balaidos in Vigo.

Las Palmas are in a real trouble right now. They are currently 18th in La Liga, positioned in the relegation zone of La Liga. They have just 20 points won since the start of the season and a record of 5 wins, 5 draws and 16 defeats. In the last round Las Palmas made a 1-1 draw against the leader Barcelona, which was a great result for the club. But will this be enough to survive? So far we can’t say.

In their last five games Las Palmas made three draws, won once and lost once. They are on par with the 17th Levante, so nothing is lost for them just yet. They have good chances to survive, but they need to be as much consistent as they can until the end of the season. it won’t be easy against Celta at the Balaidos, but they need to replay their performance against Barca and aim to win at least point from this game.

We can conclude that both teams are shaky in their recent performances, so it’s hard to predict how the game between Celta and Las Palmas is going to end. Based on league position, Celta are favourites, of course.