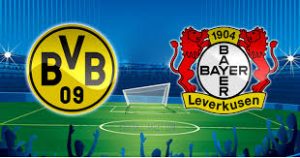 Borussia Dortmund faces Bayer Leverkusen in the most interesting game of the 31th round of the German Bundesliga. We are seeing a match between the 3rd and the 4th in the German league.

Borussia Dortmund are currently 4th in the Bundesliga with 51 points. They are on par with the 3th Bayer Leverkusen, but Leverkusen have better stats than their next opponent. These two teams have the same goal right now – to finish in the Top 4 and to qualify for the next edition of the Champions League.

Right now Borussia Dortmund have a record of 14 wins, 9 draws and 7 defeats. In their last five games they are a little bit inconsistent – three wins and two losses. In the previous round Dortmund suffered a 0-2 defeat against Schalke 04 in the Ruhr derby. For Borussia Dortmund this was a second defeat in their last three matches.

Bayer Leverkusen are 3rd in the Bundesliga with the same amount of points – 51. They have a record of 14 wins, 9 wins and 7 defeats – just like Borussia Dortmund, but with a better goal difference.

In their last five games Bayer Leverkusen won three times, made one draw and lost just once – against Koln. This was really surprising, given the fact that Koln are currently on the last 18th place with just 21 points won so far.

Both teams have 4 points advantage in front of the 5th RB Leipzig, so they are in a pretty good position to chase a Top 4 finish and return to the Champions League. But in same time, nothing is over just yet. RB Leipzig are strong enough to finish their campaign with wins and this could allow them to beat one of these two teams for the Top 4.

This is our take on the derby match between Borussia Dortmund and Bayer Leverkusen. Good luck!