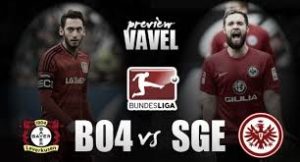 Bayer Leverkusen welcomes Eintracht Frankfurt in a match from the 30th round of the German Bundesliga.

Both teams are currently locked in a fight for a Top 4 finish and a qualification for the Champions League.

Bayer Leverkusen are currently 4th in the Bundesliga with 48 points, while Eintracht are following on 5th place with 46 points. You can see that these teams are very close to each other, so anything can happen between them.

Let’s have a look at the current form of the two teams.

In their last five matches Bayer Leverkusen won three times – against Wolfsburg, Borussia M’gladbach and RB Leipzig. The Aspirins also made one draw against Augsburg and suffered a defeat against Koln.

Meanwhile Eintracht Frankfurt won twice against Hannover 96 and Mainz 05, shared the points with Hoffenheim and suffered defeats against Borussia Dortmund and Werder Bremen.

As you can see, the two teams’ current form is pretty similar, although Bayer Leverkusen won one game more in their last five. Plus, they are going to have the home ground advantage, which makes them a slight favourite in this clash.

In the recent days the German press says that Eintracht’s manager Niko Kovac could be appointed at the champion Bayern Munich for the next season. The young Croatian is doing a great work at Frankfurt. Although it would be pretty unpleasant for Eintracht to qualify for the Champions League, but to participate there without their manager.

This is going to be a truly competitive match between two sides with the same goal – to finish in the Top 4. Although Leverkusen are the home team here, it doesn’t guarantee them the win. Niko Kovac’ Eintracht is a very solid team even away from home, so Leverkusen must give their all here. We wish you a good luck with this one!