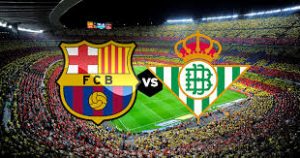 The champion Barcelona welcomes Real Betis in a game from the second round of Spanish La Liga. This clash at the Camp Nou promises a lot of emotion, so let’s take a look.

Barcelona started the new season with a loss. Ernesto Valverde’s team visited Athletic Bilbao at the San Mames Barria, suffering a 0-1 defeat. The only goal in the game was scored in the last few minutes when the veteran Aritz Aduriz penetrated the net with a beautiful shot. In this match Barca were playing without the superstar Lionel Messi, which clearly affected their performance.

During the week Ernesto Valverde had to learn more bad news. Luis Suarez and Ousmane Dembele also recieved injuries, so they won’t be avaliable for the next game. Meanwhile Lionel Messi started training, but it’s not clear if he’s going to be ready for the match. Or to start it at least. This could give a chance to players like Rafinha and Carles Perez, who could start upfront alongside the summer signing Antoine Griezmann. 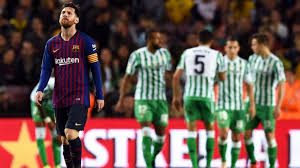 In the same time Real Betis also began the new campaign with a loss. After the sacking of Quique Setien, Rubi is now the new manager of the Andalusians. But his debut was not successful, because Betis suffered a 1-2 defeat at home against Real Valladolid in the first round.

We can say that the man responsible for the loss is the goalkeeper Joel Robles, who was sent off after just 8 minutes of playing. Sergi Guardiola and Oscar Plano scored for the visitors, while Loren Moron scored Betis’ only goal in the game. Because of his red card, Joel Robles won’t be avaliable for the visit to Barcelona.

Can Barcelona record a first win for the season, facing Real Betis at the Camp Nou? Maybe this depends on Lionel Messi’s fitness. We shall see if he can help the Catalans on Sunday.